Work hard, play hard and be amongst the best of the best at The Brits ski and snowboarding competition in Laax. 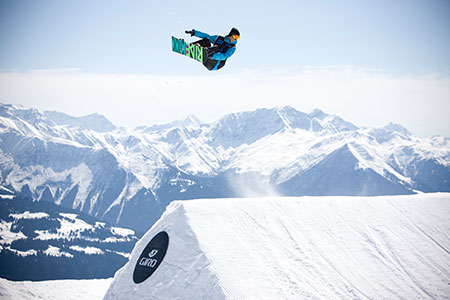 
Laax is an amazing resort, which is part of the Flims-Laax-Falera ski area. Laax has access to 63 ski lifts, leading onto 103 individual ski pistes.

The snow in Laax is generally very reliable as its above 2000m. As well as good snow conditions, there are beautiful mountain views and excellent terrain for both beginners and advanced skiers.

The atmosphere at night is great in Laax. There are many night clubs, restaurants and bars for a fun night out in the town after the competitions during the day.

Another fabulous benefit to Laax is its location. There are 4 airports within 2 hours from the resort making it an ideal option for short sk and snowboard breaks.

The Brits is a snow festival showcasing some of the world's best talent in a host of British Championships and competitions, attracting up to 1000 revellers for a weeklong festival of snowsports and music. Aimed at those that like to ride as hard as they party, its been nicknamed The Riders Festival.

From indoor championships to half pipes to snowboard and skicross, observe your pro peers hit the slopes and a whole host of obstacles throughout the festival. Bangers and Cash awards cash prizes in another fun rail-focused jam event. Pick up some new skills and explore the vast versatile ski area of laax with 58 pisted ski runs and 4 brilliant snow parks.

All abilities can find something at The Brits and when a day on the slopes is done, the apres sessions, live bands and hottest DJs will keep up momentum in the mountains until sunrise. Expect an eclectic mix of music for your soundtrack to The Brits, previous line-ups have welcomed the likes of Pendulum, The Correspondents, Ben Howard and Rob Da Bank.


Fly to Zurich, then get a train from Zurich to Chur, Postautostation this will then get you to Laax.


Where is it - Laax, Switzerland

Rough Price - Free to watch. It costs £20 to enter each discipline.